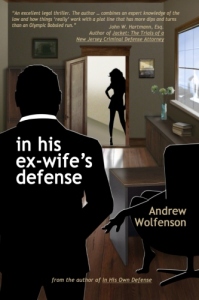 New Jersey attorney Eric Goldberg is back, and he’s up to his neck in the most emotionally-challenging and potentially difficult case of his career. When his ex-wife is charged with vehicular homicide and turns to Eric for help, he is forced to not only battle the burden of representing the woman whose infidelity led to the end of their marriage, but also faces the daunting task of representing the first person to be locally prosecuted under a law regarding texting and driving.

Eric’s varied emotions regarding his ex-wife and the stress of his internal conflict are further complicated when a former attorney trying to further his own political aspirations continuously publicizes the case, and by the fact that the Prosecutor handling the case is a very attractive young woman. At the same time, Eric is being pursued by a reporter who resembles a woman from his not-so-distant past. With all these distractions, will he be able to win the case for his ex-wife?

“Eric Goldberg – lawyer, lover, mensch – successfully defended himself the last time out.  But now he takes on a much more difficult client:  his ex-wife. Andrew Wolfenson spins another just-real-enough tale of the everyman lawyer to make you think, ‘Did this really happen?’ Sex, politics, criminal justice, and more sex.  Read on and be entertained.” says Criminal Defense Attorney and former Assistant United States Attorney Henry E. Klingeman, Esq.

“In His Ex-Wife’s Defense is an excellent legal thriller. The author hit the mark here. He combines an expert knowledge of the law and how things “really” work with a plot line that has more dips and turns than an Olympic Bobsled run. As for the ending – guaranteed that you will not see it coming. This page turner is a must read!” raves Criminal Defense Attorney and author of “Jacket: The Trials of a New Jersey Criminal Defense Attorney” John W. Hartmann, Esq.

Criminal Defense Attorney and former Municipal Court Judge (Union Township 1999-2005) John Paragano, Esq. offers this view from the bench: “A novel should educate and not misstate … Andrew’s books are refreshing because he does give the reader an accurate reflection of the legal system, right down to a realistic portrayal of the interaction between lawyer and client. I am impressed by his presentation and the ease with which he tells a story from start to finish.”

In His Ex-Wife’s Defense is now available on Amazon.com and for Kindle.

Over 33 million people in the United States participate in fantasy baseball and/or football leagues, and these leagues generate over two billion dollars per year in revenue. Some take their participation in such fantasy leagues more serious than others, suspending reality as they try to fulfill their dreams of serving as a major league owner or General Manager. For Jeff Goldstein, fantasy baseball is not just a game; participation in the league takes over his life. His obsession with winning his fantasy league, and its $150,000 prize, consumes his every thought and threatens his relationship with his girlfriend, his friends, and his job.  How far will Jeff go in his desire to win the league? What actions will he take, or ask others to take, as he struggles to separate fantasy from reality?

Attorney Andrew Wolfenson, author of “In His Own Defense”, offers up his latest thriller, the story of an individual so obsessed with winning his fantasy baseball league that nothing else in his life is safe – and nor are the real-life baseball players whose statistics are used in his fantasy league.

Anthony “Tony” DeMarco, Vice President of the Lancaster Barnstormers, a minor-league baseball team, is equally effusive in his review of the novel: “Deadly Fantasy takes us deep into uncharted territory, the possible ‘dark side’ of fantasy baseball, and intricately describes one fan’s struggle between reality and fantasy. I thoroughly enjoyed the book and its comparisons of different baseball eras and, also, the battle between fantasy players’ loyalties to specific players as opposed to teams.”

A reviewer on Amazon.com writes:  “Beautifully written. I loved the pace of this book. As a fantasy sports fan and player, I loved the story. Well done Andy, I can’t wait to read your next novel.”

“Deadly Fantasy: A Baseball Story” is available on both Amazon.com and for Kindle 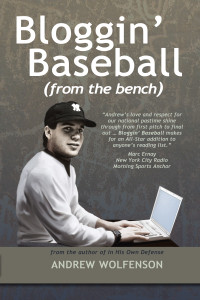 Andrew Wolfenson, author of the legal suspense novel “In His Own Defense,” returns to his sportswriting roots with “Bloggin’ Baseball (from the bench)” - a collection of his baseball-related blog posts spanning the years 2009 through 2013, all re-edited and featuring updated “extra innings” of commentary. In the book, Wolfenson addresses multiple topics and their relation to the National Pastime, including steroids and other performance enhancing substances, Jews in baseball, the issues surrounding homosexuals in the locker room, and, of course, New York’s two baseball teams, the Mets and his beloved Yankees.

“Bloggin’ Baseball (from the bench)” is the perfect gift for the baseball fan in your life, whether as a present for Opening Day, Graduation, or Father’s Day.

Signed Copies of both Bloggin’ Baseball (from the bench) and  the author’s previous book, In His Own Defense, are available through The Clinton Book Shop:  CLICK HERE to purchase your signed copy.

“Bloggin’ Baseball (from the bench)” is available on Amazon.com and Kindle.