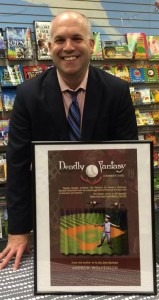 Andrew Wolfenson, Esq. (pictured above) is the author of two books featuring fictional attorney Eric Goldberg – “In His Ex-Wife’s Defense” and “In His Own Defense” – as well as “Deadly Fantasy: A Baseball Story”

As a young man, he dreamed of becoming a writer, particularly a sports writer. In college, these dreams became reality. As Sports Editor for his school’s newspaper, he wrote a weekly sports column, and later became its Editor-in-Chief. After graduation, however, he chose to forsake his writing/sportswriting aspirations to follow his other dream – becoming an attorney. Almost two decades later, the internet provided the proverbial second chance, and Andrew Wolfenson began blogging. Readership for his blogs has approached 400,000, and his articles have been copied to websites as geographically diverse as Pakistan and Pennsylvania. His writing desires re-awakened, he also began to write fiction, culminating in the publication of In His Own Defense, Deadly Fantasy: A Baseball Story, and the recently-released In His Ex-Wife’s Defense.

In His Ex-Wife’s Defense, released on November 30, 2014, tells the story of Attorney Eric Goldberg’s latest noteworthy case, the most emotionally-challenging and potentially difficult case of his career. When his ex-wife is charged with vehicular homicide and turns to Eric for help, he is forced to not only battle the burden of representing the woman whose infidelity led to the end of their marriage, but also faces the daunting task of representing the first person to be locally prosecuted under a law regarding texting and driving. Eric’s varied emotions regarding his ex-wife and the stress of his internal conflict are further complicated when a former attorney trying to further his own political aspirations continuously publicizes the case, and by the fact that the Prosecutor handling the case is a very attractive young woman. At the same time, Eric is being pursued by a reporter who resembles a woman from his not-so-distant past.

Andrew Wolfenson is an attorney specializing in Divorce and other Family matters, Bankruptcy, Litigation, and Real Estate. Further information about his law firm may be found at www.wolfensonlaw.com.  He also currently serves as the Co-Chairman of the Franklin & Marshall College Alumni Association’s New Jersey Chapter.

A life-long Yankees’ fan, he is also the author of a legal-suspense novel, “In His Own Defense”, and resides in Randolph, New Jersey, with his wife, three daughters, and dog. 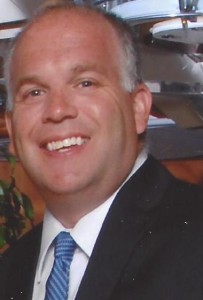 For more information, visit the “In His Own Defense” website. 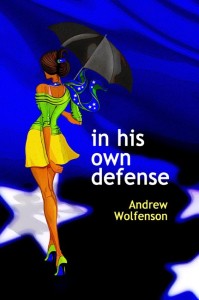